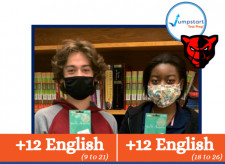 62 percent of students with a prior score improved an average of +3.10 points in the English sub-section

Karla Lefan, an English teacher at PHS who taught the Jumpstart program, says, "It was extremely beneficial for our students. With the completion of the Jumpstart program, my students have grown so much; one student beamed as his score showed he could potentially grow by as many as 12 points!" Natalie Sumrall also led the review from her classroom and had similar comments: "I really liked that it covered all the skills that are on the ACT® English section because for me to review all those things in class is impossible. There are too many standards for me to go over that they learn at the lower grade level, yet they needed the review." She says that one of her students, with a 504 Plan due to Attention Deficit Hyperactivity Disorder (ADHD), significantly improved by being able to "watch the modules and re-watch the modules," and that Jumpstart really is "something special." Jamie Sproles is another teacher who led the Jumpstart Review and says Jumpstart is most beneficial because of, "The fact that it's lessons and then questions, and that once they learn a rule, they review it with an ACT-style multiple choice question which helps them directly apply that knowledge." As teachers, they highly recommend that Jumpstart Test Prep be implemented in schools across the State of Mississippi and have hopes that it will be continued at Petal High School in the coming years. Sproles says, "It's one of the most successful ways for our students to review for their ACT and it proved to be a win."

Students also provided their thoughts about the program. On his second ACT® attempt, PHS junior Sam Bullock improved his English sub-score +12 points and his composite score +7 points. He says, "It helped out a lot. I wasn't really good at English but Jumpstart made it seem a lot easier and helped me improve. I wasn't as stressed - I knew how to time myself. Jumpstart was most beneficial because it reviewed things I hadn't seen in a while and didn't go over as much." PHS junior Jewel Alexander agrees, as her English sub-score also rose +12 points, and she improved her composite score +8 points over her prior attempt. "Jumpstart helped me understand the questions on the ACT® and it introduced topics to me that I didn't really know before." She tells future students to "Pace yourselves and just do it because once you see the difference it's going to be worth it."

Jumpstart Test Prep is an online review program based on over 60 years of work by Dot McClendon, a legendary educator and Mississippi's 19-year STAR teacher hall-of-fame inductee. "As a teacher at The Mississippi School of the Arts and several other schools during my career, I was able to help guide the preparation of students in person," said McClendon. "Now through our online, on-demand video review, students in PHS classrooms, as well as classrooms around the country, around the breakfast table, or on the couch at home, are able to benefit from our approach."

All juniors at PHS had access to the following resources:

All media Inquiries should be directed to hannah@jumpstarttestprep.com