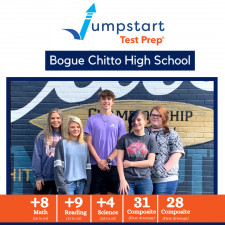 BROOKHAVEN, Miss., April 16, 2021 (Newswire.com) - Jumpstart Test Prep recently released the ACT® improvement results from Bogue Chitto High School, whose junior class used the program to prepare for the state-administered February 2021 ACT® exam (American College Testing). Following completion of Jumpstart's complete ACT prep review, 75 percent of the students with a prior ACT score improved an average of approximately +2 points above their best prior attempt. Similarly, the school had nearly 50 percent of its students improving their prior Math sub-scores by an average of +3.33 points, 62 percent improving their Science sub-scores by an average of +2.12 points, as well as 54 percent of students improving their Reading sub-scores by an average of +4 points. "I really appreciate Jumpstart. I do regret that students did not get the opportunity to complete the program prior to the test administration due to the ice storm; however, all of our students know that they have until late summer to use the program for their next attempt at the ACT. We certainly appreciate the staff at Jumpstart for their dedication to all students' success and look forward to future collaboration as we strive to help grow these babies into good and smart people," said Scott Merrell, Bogue Chitto High School principal. "Our kids are definitely, definitely benefiting from it. If the implementation of the Jumpstart ACT Review is done with integrity, the quality of the program will carry those kids through and you will see significant changes in your child's ACT scores," Merrell continued.

Students also provided their thoughts about the program. On her first ACT® attempt, Bogue Chitto junior Breanna Meche achieved an impressive 31 composite score. She says Jumpstart made the difference because, "It went over things I hadn't seen in a long time and a few things I had never seen before." Bogue Chitto junior Ally Roberts agrees, as her Math sub-score rose +8 points, and she improved her composite score +4 points over her prior attempt. "I liked that it (Jumpstart) went over stuff I hadn't seen in a long time." She tells future students, "If you pay attention, it helps a lot!" Another student, Brandon Welch, who improved his Science sub-score +4 points over his last attempt says, "Jumpstart allowed me to do the best that I possibly could to get the best score I can."

Jumpstart Test Prep is an online review program based on over 60 years of work by Dot McClendon, a legendary educator and Mississippi's 19-year STAR teacher hall-of-fame inductee. "As a teacher at The Mississippi School of the Arts and several other schools during my career, I was able to help guide the preparation of students in person," said McClendon. "Now through our online, on-demand video review, students in Bogue Chitto classrooms, as well as classrooms around the country, around the breakfast table, or on the couch at home, are able to benefit from our approach."

All juniors at Bogue Chitto had access to the following resources: