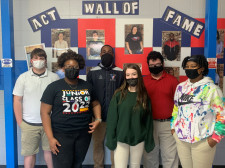 COLUMBIA, Miss., May 28, 2021 (Newswire.com) - East Marion High School (EMHS) thrives on the motto of "Inspiring Excellence." However, it is not just a motto: the school puts it into practice by investing in the future of their students. This year, EMHS provided their high school juniors with Jumpstart Test Prep (Jumpstart), an online, on-demand Complete ACT Review Program developed by 19-year STAR teacher, Dot McClendon. The investment in Jumpstart made a difference for their juniors. Jumpstart recently released ACT improvement results from EMHS. The junior class used the Jumpstart Complete ACT prep review to prepare for the state-administered February 2021 ACT® exam (American College Testing). Following completion of Jumpstart's complete ACT prep review, 43 percent of the students had an average ACT English and ACT Reading score improvement of +2.33 points over their best prior attempt. The school also had 29 percent of its students improving their Science scores by an average of +3.5 points and 14 percent improving by an average of +2 points in Math test sub-scores.

Several students were recognized for their improvement results and shared their thoughts about the Jumpstart review program. Shamyah Sims, who had a 27 percent improvement over her prior best score, commented, "Jumpstart Test Prep really helped me because it gave great tips and tricks, the presenters were very energetic and they gave an overall recap of things I learned in previous grades. Jumpstart is very useful to reach a high ACT score." Nicholas Colvin achieved a +5 improvement in Science and in Reading. Colvin said, "Jumpstart helped me the most with my time management. It provided very useful strategies I hadn't thought of before and the recap of content from grades ago - that made all the difference." Steven Robbins shared, "Jumpstart made the difference because it reviewed materials that I had completely forgotten about. Jumpstart is so helpful for reaching high ACT scores." Robbins achieved a 23 composite score on his first attempt. Terry Lisenby, whose score increased +2 points in English and in Math, agreed with Robbins: "Jumpstart is a recap of content from late elementary and junior high. Reviewing in that way really helped me to achieve a higher score." Destiny Brown emphasized the feelings of Lisenby: "Jumpstart makes the difference because it reviews things from several grades ago." Brown increased +2 points in the Science sub-section, going from a 20 to a 22. Alexis Lott scored a 21 in the English sub-section on her first attempt. Lott commented, "Jumpstart Test Prep helped me because it had very useful tips and tricks and the young presenters really helped to keep me focused. The best part about Jumpstart was the review of things I have not seen in a long time."

Kylia Baldwin, a teacher at East Marion who implemented the Jumpstart review program, provided her thoughts about how Jumpstart helped her students excel. "The whole Jumpstart review program is absolutely amazing. It starts at the foundational basics and explains everything in a thorough manner while giving students a refresher on materials learned throughout their entire academic career. I am very proud of the results that my students saw after using this review program." Baldwin continued, "I hope to see Jumpstart continue to be implemented here at East Marion and also across Mississippi. I think Jumpstart would be a tremendous help to our state and raise our ACT scores."

Jumpstart Test Prep is an online review program based on over 50 years of work by Dot McClendon, a legendary educator and Mississippi's 19-year STAR teacher hall-of-fame inductee. "As a teacher at The Mississippi School of the Arts and several other schools during my career, I was able to help guide the preparation of students in person," said McClendon. "Now through our online, on-demand video review, students in East Marion classrooms, as well as classrooms around the country, around the breakfast table, or on the couch at home, are able to benefit from our approach."

All juniors at EMHS had access to the following resources: